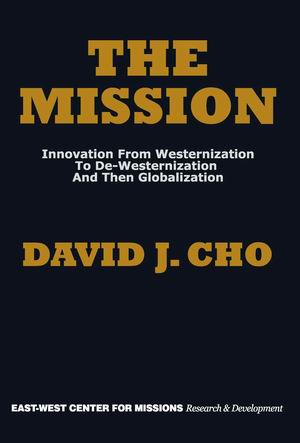 The publication of this volume of talks and studies done in English by Professor David J. Cho opens up to the non-Korean speaking world of mission leaders and missiologists, the principles and thinking that drove Cho to initiate so many helpful efforts in
missions. Cho has been the igniter of many effective international mission developments coming from Third World countries in these
last decades.

Foreword
Preface
A Study of the Foundation of the Church of Korea and Its Growth
A Study on Church Growth of Korea After World War II
A Report on Evangelicals in Korea
An Open Approach for Cooperative World Missions
An Aggressive Attempt for World Outreach: A New Approach of Mission Promotion in Korea
Severance, Solidarity and Sodality: A Proposal on the Shape-up of an Asian Mission Community
Innovation of Missions Structures
Response to Ralph D. Winter & Jacob Loewen
Asian Mission and Church Growth
A Prophetic Voice: Creating a Climate for Bridge Building between New and Old Missions Forces in the Current Situation of the World
Take a Good Look at Asia
Survey and Evaluation of Missionary Movement in Asia
Solidarity of Third World Leadership
Innovation of Financial Structure
Mutual Confi dence and Reciprocal Structure
The Development of Asian Leadership for Mission
The Nineteen Eighties: A New Decade of Chaos
Social Context and the Christian Text
Mission and Evangelism: Are Cross-Cultural Ministries Effective or Defective?
A Warning to China Rush: A Note to Safeguard the Self-Respect of Overseas Chinese Brothers
The Growth of Korean Mission and Its Contribution to World Evangelization
Contemporary Growth of Korean Missions
Understanding Religious Decrees of the Indonesian Government
New Mission Encounters in the Eighties
Why the New Wine in the Old Wineskins?
De-Westernizing the Asian Church and Renovating Missions Structures
World Peace and World Christian:
The Way of Professionals’ Involvement in World Mission
The Fact of Mission Today and the Path for Mission Tomorrow
The Spread of Islam in Korea and Korean Encounter with Islam
Why and How of the Mutual Fund for Third World Missions Advance
We Shall be Fellow Helpers
Endangered World and World Mission: The Way of Professionals’ Involvement in World Mission
Let Us Set the Goal to be Achieved
Mission to the Whole World for the Glory of God and Peace on Earth
The New World Mission for the Third Millennium
Neo Vision of Mission in the New Millennium
An Appraisal of Non-Western Mission Movements
Rethinking the History of Mission
Perspectives on the Distinctive Missionary Motives in Asia
Let Us Restore the Way of Apostolic Mission in the Mission for the 21St Century
Asian Mission: Historical Perspective
Evangelization in the 21St Century and Missionary Training in Asian Context: Historical Perspective
New Christianity in the 21St Century and Asian Mission as A Major Force in Mission
The Principle of Missionary Making and Effective Missionary Training
Divine Calling of the Stateless Korean People for Thy Kingdom
Perspectives on East-West Collaboration for Non-Western Mission Advance
Kingdom Mission: DNA of the Missionary Task
The Church of God as Agent For the Kingdom On Earth
Apostolic DNA and Missionary Movement of the Early Korean Church

Disclosure of Material Connection: Some of the links in the page above are "affiliate links." This means if you click on the link and purchase the item, I will receive an affiliate commission. I am disclosing this in accordance with the Federal Trade Commission's 16 CFR, Part 255: "Guides Concerning the Use of Endorsements and Testimonials in Advertising."